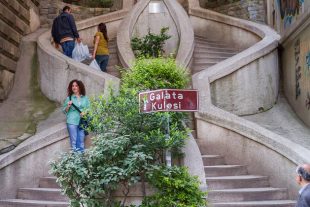 Under the Ottoman Empire, Istanbul was one of the world’s great ethnic smorgasbords. Greek, Armenian, Albanian and Turk all got along relatively well and lived peaceably, if not equally, under Ottoman law. So it shouldn’t be surprising to learn that Jews fleeing persecution in Europe found a permanent home here, and have long been part of the city’s cultural fabric.